Inside the Countryside Mall in Clearwater, sitting around a table just a short distance from the Tampa Bay Skating Academy’s ice rink, are eight women figure skaters, one cake and no husbands. 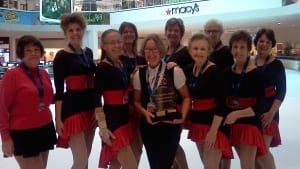 That’s a proven formula that has helped earn the Ice Crystalites, a group of energetic women whose members range in age from 48 to 81, earn another first place finish at the Ice Skating Institute’s Adult National Championships in New York last October.

Following this win — their thirteenth gold medal in sixteen times competing — their goal now, as always, is to recruit new members to their roster and add to the fun.

Between nibbles of cake, a treat they indulge in after every practice, they explain why other adult skaters might want to join their group and travel to the annual national competition: 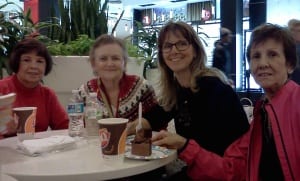 “We just have a good time,” says Dolly Mock.
“Girl time” emphasizes Carrie Keohane.
“Being goofy in the room…” co-captain Marcie Schultz says.
“…talking all night,” Mock adds. “And, we get to go to a lot of places we otherwise wouldn’t go…”
“…without our husbands,” chimes in another.

Then, of course, there’s the skating — that one factor, that single constant in the equation that continues to bring them together year after year.

“Some say it’s an addiction,” co-captain Pam Huff says, of the enduring desire to skate. “I like to compete, and I like the freedom to do funky, weird stuff, like Sesame Street music and Time Warp from the Rocky Horror Picture Show.”

“You move so fast but with nothing pulling you,” says Keohane, trying to describe the feeling of gliding across the ice. “It’s wonderful.”

It’s therapeutic, they all agree.

“When you’re out there all alone skating and you have all these people cheering you on, it makes you skate better,” Sue O’Neil says.

For the Ice Crystalites, skating is clearly a passion, an inner drive they’ve all fostered. Take, for instance, the group’s coach, Nadine Pearen. She’s been skating for 58 years, coaching for 35, and loves working with these self-motivated women. 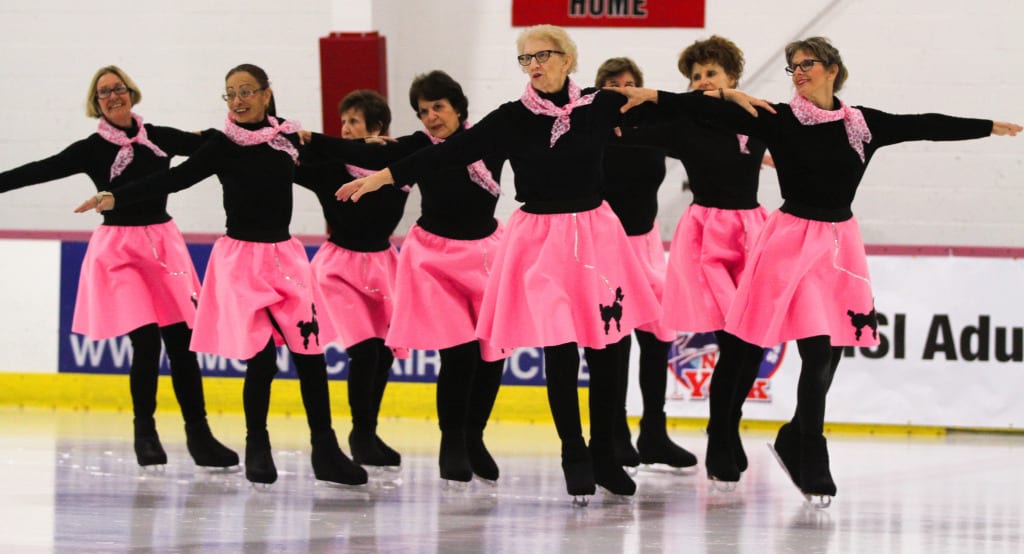 The Ice Crystalites perform at the 2014 ISI Adult National Championships.

“They’re a great group,” says Pearen, who also skates on the team. “They’re here because it’s strictly a self-directed thing. They appreciate what I do for them and it’s good exercise. They have coffee and cake after practice every week. So it’s more like a family.”

But winning matters too. The team took first by a landslide in October. They now have a baker’s dozen of wins under their belts, with no intention of letting up. 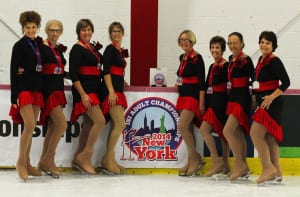 “We got first place by 156 points. We really squished them,” chuckles Schultz, who adds that TBSA’s Countryside team and the team that came in second are good friends. “We’re friends with all those ladies. We do it for the fun — all the camaraderie and all the cheering.”

Skaters can compete as a team and individually. If they place in the top five, points are given according to how they finished. The points are then added and a team score is given.

Unfortunately, team member Marion Sudduth, who first supported her daughter’s skating for 13 years before taking to the ice herself, missed the fun.

At 81, Sudduth is the oldest member of the team. She was all set to compete in New York but had to stay home to be fitted for a pacemaker.

“I wished I was with them. But they brought me back medals,” Sudduth says. She’s feeling much better now and says she’s “aging backwards.”

“She’s back on the ice, practicing and training for this year’s competition,” says Pearen, who also is TBSA Countryside’s assistant skating school director. 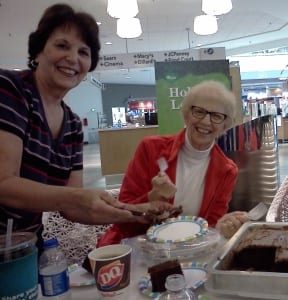 While Pearen skated in her youth competitively, many team members didn’t get involved in skating until adulthood.

“Most of us got into it because our kids were in it,” Schultz says. The youngest on the team at 48, she first hit the ice when her daughter, Megan, was 4 years old and started taking lessons. Schultz says Megan, 14, still participates in the sport.

As the women gear up for the competition in Las Vegas, Oct. 23-25, 2015, their prime directive is to make sure they have enough skaters. They need at least eight on the team.

“Right now, we’re down some members,” Schultz says. “We need more. It would be nice to have about 12.”

For team member Lucy Deiley, who bakes the cake every week for the after-practice get-together, more members would mean more baking. But she doesn’t mind. “It’s my hobby,” Deiley says.

For her, as well as the other Ice Crystalites, having a bigger team to compete at nationals would be the icing on the cake.

Latest from the Blog

At Clearwater Ice Arena’s “A Winter Recital” skating show recently, 6-year-old Logan kept jumping up to see what was happening on the ice. “Mom, I want to see the show!” Logan exclaimed. “I can’t see the show!” It’s the first figure skating holiday recital at the new ice rink in Largo, and Logan isn’t tall...

Inside the Countryside Mall in Clearwater, sitting around a table just a short distance from the Tampa Bay Skating Academy’s ice rink, are eight women figure skaters, one cake and no husbands. That’s a proven formula that has helped earn the Ice Crystalites, a group of energetic women whose members range in age from 48...

Roger Estey spent most of his teenage and college years figure skating and ice dancing. Then along came life off ice – a job, marriage, kids… Those long hours at the rink receded deep into his past. Thirty years later, though, circumstances brought him back. “When I walked back into the rink it felt like...

As the Sochi Olympic Games come to a close, figure skating is the sport that continues to be one of the most exciting events to watch among all the competitions.  But from an Olympic coach’s perspective, those few minutes of watching their skaters perform on a world stage are far from exciting – they’re just...